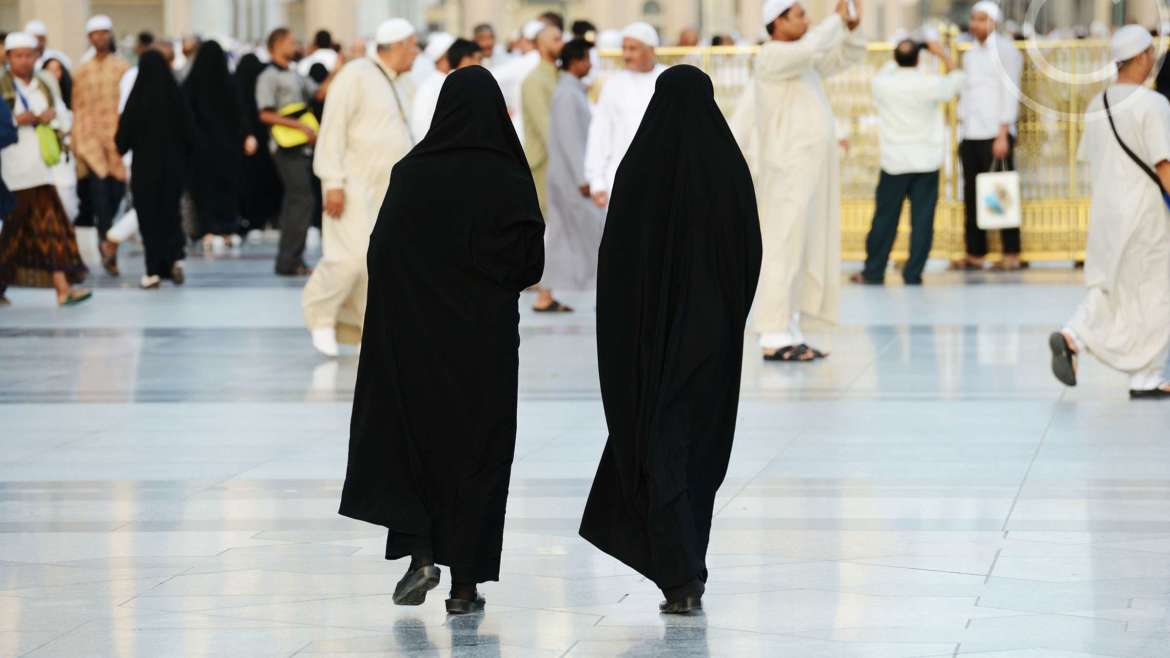 As Ishmael grew, Prophet Abraham saw in him intelligence and the readiness to obey God. Abraham was hopeful that he would see a lot of goodness from his son– that is, that Ishmael would obey and worship God. Before Isaac’s birth, with Ishmael in this good state God subjected Prophet Abraham to a difficult test. Abraham was ordered to end the life of this dear child.

Ishmael was the first son of Abraham. He was loved and cherished by his father. God subjected Prophet Abraham to this difficult test to show Abraham’s quickness to obey Him.

Abraham had a dream that he was slaughtering his son. Abraham knew that this was an order from God, as the dreams of the prophets are part of Revelation.

Without delay, Abraham told his son to bring a rope and a knife, and to accompany him along a certain route of Makkah, which is known as the route of Thabir. On their way, Satan appeared to them, wanting to block Abraham from fulfilling the order of God.

When Satan despaired at misleading Abraham, he appeared to Ishmael, who was behind Prophet Abraham, carrying the rope and the knife.

Satan said, “Young man, do you know where your father is taking you?” He said, “To get wood for our family from this route.” (This is what he thought.)

When Ishmael did not listen to Satan, the latter went to Hagar, Ishmael’s mother, and asked her, “Do you know where Abraham took Ishmael? She said, “He went to bring us wood.”

Satan, the enemy of God, left as a loser failing to achieve anything from Abraham, Ishmael,or Hagar. By the Will of God, his words did not fluster them. They unanimously stood obedient to the order of God.

When Prophet Abraham was alone with his son on the route of Thabir, Prophet Abraham addressed his son by saying, “O son, I have seen in my dream that I am (ordered of) slaughtering you, so what do you have to say?” He said, “O father, do that which you are ordered and, God willing, you will find me patient.”

Then Ishmael said, “O father, if you want to slaughter me, tie me well so that my blood will not splatter on you and stain you. The pains of death are intense, and I may shake under its throes. Sharpen your blade so you are quick to finish me. When you want to slaughter me, do it in a way that you do not see my face, and that I do not see the blade (to avoid getting scared). If you want to take my clothing back to my mother, for her to cherish, then do so.”

Prophet Abraham told him, “You are such a good assistant to me in carrying out God’s order!” Abraham tied Ishmael down and sharpened his blade, as Ishmael suggested. Abraham made sure not to look at Ishmael’s face, then he placed the blade on his throat.

At that point, an angel called Abraham and told him, “O Abraham, you have fulfilled God’s order.” This angel (Gabriel) told him “Take this sheep and sacrifice it in place of your son,” as it is cited in verse 107 of Suratus-Saffat.

Instead of Ishmael, a hefty ram with horns and red wool was slaughtered. The ram had grazed in Paradise for a long time. Moreover, it is said that it was the same ram that Abel, Adam’s son, had offered. God made that ram come down to Earth, and Prophet Abraham slaughtered it in Mina (place close to Makkah). This is the reason that Muslims slaughter a sacrifice at that place during Hajj. The people making the pilgrimage spend of their money to buy and slaughter an animal, and the meat is given to the poor of Makkah.

The two horns of that ram from Paradise hung on the Ka^bah for people to see for many hundreds of years. They were still there when Prophet Muhammad lived, and they continued to be there until the rulership of ^Abdullah Ibnuz-Zubayr. At that time (73 H), the Blessed House was set ablaze by the unjust. These two blessed horns were destroyed in that dreaded fire.

From this story of Prophet Abraham and his family, we can learn many lessons. The first is that they were very quick to fulfill the orders of Allah. They said that this was an order from Allah; it was an obligation. Also they did not allow the enemy, Satan, to divide the family by inciting them against each other, especially against the head of the family, Abraham, peace be upon him.

Our Islamic history is crowded with examples of sacrifice in obedience to Allah, displayed by the prophets and their followers. One such an example is:

The Story of the Young Boy and the Worshipper

“There lived a king before you and he had a (court) magician. As the magician grew old, he said to the king: I have grown old. Send some young boy to me to teach him magic. The king sent to him a young boy to train him (in magic). On his way to the magician, the young boy met a (Muslim) worshipper. The young boy listened to the worshipper’s talk and was impressed by it.[1]

The young boy then came to that worshipper and informed him. The worshipper said: O son, today you are superior to me. Your affair has come to a stage where I find that you will be soon tested. In case you are tested do not tip off others about me. The young boy began to treat the blind and those suffering from leprosy. In fact he began to cure people from (all kinds) of illness.

When a courtier (companion) of the king who had gone blind heard about him, he came to him with numerous gifts and said: If you cure me, all these things collected here will be yours. The young boy said: I myself do not cure anyone. Allah is the One Who cures. If you believe in Allah, I shall supplicate Allah to cure you. The blind man affirmed his faith in Allah and Allah cured him.

Then the young boy was brought and it was said to him: Leave your religion. He refused to do so. The king handed the young boy over to a group of his courtiers. He said to them: Take him to such and such mountain; make him climb up that mountain. When you reach its top, order him to renounce his faith. If he refuses to do so, throw him down the mountain. So, they took him and made him climb up the mountain. The young boy said: O Allah, save me from them in any way You will. The mountain quaked and they all fell. The young boy came walking to the king. The king said to him: What has happened to your companions? He said: Allah has saved me from them.

He again handed him to some of his courtiers and said: Take him and carry him in a small boat. When you reach the middle of the ocean, order him to renounce his religion. If he does not renounce his religion, throw him into the water. So, they took him. The young boy said: O Allah, save me from them in any way You will. Shortly after, the boat turned over and they drowned.

The young boy came walking to the king, who said to him: What has happened to your companions? He said: Allah has saved me from them.

The courtiers came to the king and said to him: Do you see what you were trying to avoid? We swear by Allah that what you were trying avoid took place. The people have affirmed their faith (in the Lord of the young boy). The king commanded ditches to be dug at important points in the path. When these ditches were dug, and the fire was lit in them it was said to the people: Those who do not turn back from the boy’s religion will be thrown in the fire or they will be told to jump in it. The people courted death but did not renounce their religion. A woman with her child felt hesitant about jumping into the fire. Her child said to her: O mother, endure this ordeal, for you are following the Truth.

Today, we are rejoicing an important and blessed occasion, ^Idul-’Adha. The occasion of sacrifice, obedience, and generosity. We ask Allah to bring the next occasion while the Muslims are enjoying good conditions.

Among the good and rewardable practices is to offer a sacrifice (ud-hiyah), as per the Qur’an: ﴾فصَلّ لربّـِكَ وانْحَرْ﴿, i.e., perform the ^Id Prayer then slaughter the animal. It starts from the ^Id Prayer until the last day of Tashriq.

It is recommended to give one-third to the poor Muslims, one-third as a gift, and to consume the last third.

It is sunnah to repeat the special takbir statements[2] after the obligatory prayers, starting at the dawn of ^Arafah Day until the ^Asr of the last Tashriq day.

Despite the variation in their backgrounds, thousands of Muslims are presently performing Hajj, united by their faith in God and His prophets. Those who perform it properly will exit it as sinless as on the day their mothers delivered them.

It behooves us on this great day to obey Allah by seeking the Obligatory Knowledge, performing the obligations, including the daily prayers and by avoiding all sins. This will makes united adhering to the rules of Allah as He ordered.

It is recommended to be more generous with the wife and children; to give to the Muslim relatives and visit them; and to reconcile the Muslims’ differences.

Remember your fellow Muslims elsewhere who have been suffering from killing, destruction, and evacuation.

May Allah accept your good deeds, forgive you and me.

May Allah grant us Performing Hajj,

May Allah grant us visiting and seeing the Prophet.

[1] In one narration: “He embraced the religion of the worshipper,” which is Islam.